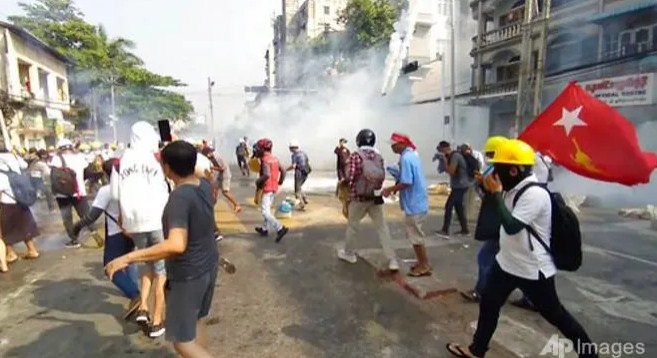 Myanmar police fired on protests around the country on Sunday (Feb 28) in the bloodiest day of weeks of demonstrations against a military coup and at least 18 people were killed, the UN human rights office said.
Rescue workers told AFP that three men had been shot dead in southern Dawei city, while another two teenagers were killed in the town of Bago.

A sixth person died in Yangon, a lawmaker from Myanmar’s ousted civilian government said in a Facebook post.

Myanmar has been in chaos since the army seized power and detained elected government leader Aung San Suu Kyi and much of her party leadership on Feb 1, alleging fraud in a November election her party won in a landslide.

The coup, which brought a halt to tentative steps towards democracy after nearly 50 years of military rule, has drawn hundreds of thousands onto the streets and the condemnation of Western countries.

Scores of students and teachers have been detained in Yangon, and several bloodied people were seen being helped away from the protests in the city.

“Police got out of their trucks and started throwing stun grenades without warning,” Hayman May Hninsi, who was among a group of teachers protesting in Yangon, told Reuters. They fled to nearby buildings.

“Some teachers got hurt running. We’re assessing the situation and whether to go out again or not.”

Doctors and students in white lab coats also fled as police launched stun grenades outside a medical school in another part of the city, videos posted online showed.

In the northern city of Mandalay, police fired guns into the air, trapping protesting medical staff in a city hospital, a doctor there told Reuters by telephone.

An activist in Mandalay, who wanted to remain anonymous for security reasons, told DW that he witnessed the military targetting ambulances and hospitals in the city.